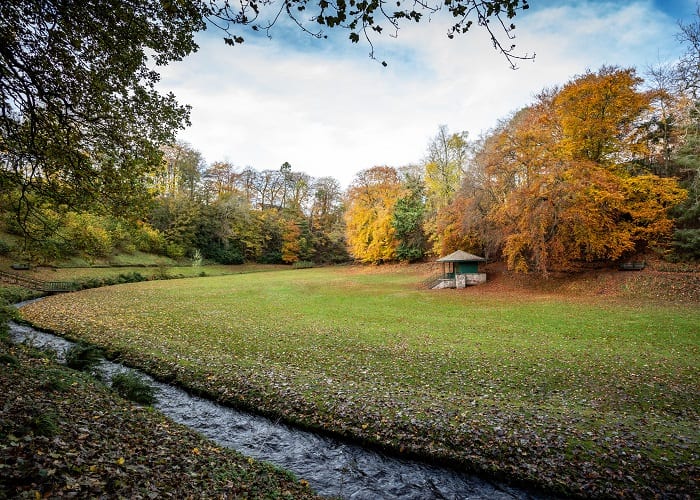 The Den, Kirriemuir is a peaceful area of green space close to the centre of the town. It was opened in 1867 and extended later in the 19th century. It is situated in a small valley with the Gairie Burn running through. There is a bandstand, children’s play area and a public toilet.

The land in the south part of The Den was gifted by Sydney Wilkie to the town in 1867. Further land was acquired by the town with the final section being acquired from Kinnordy Estate.In 1908, the whole property was transferred to the Provost, Magistrate and Councillors of the Burgh of Kirriemuir on behalf of the community.  It is now looked after by a group of dedicated volunteers from Kirriemuir Regeneration Group.

There are paths at various levels through The Den which show the Den from various directions.

The Den House, previously the park-keeper’s cottage sits in The Den beside the Gairie Burn. It is a two storey red sandstone building with gable ends; slated roof with chimneys at both ends. It is unoccupied at present and a variety of suggestions have been made as to its future use.

The Gairie Burn enters the Den at the northwest bringing water from Kinnordy Loch via the Muckle Drain into the Den. There is a waterfall at this end which can be quite spectacular when the burn is in spate. It is best viewed from the High Bridge near Lochmill.

The ‘Cuttle Well’ is a natural spring; this has recently been restored by the volunteers. It sits near to the High Bridge close by the waterfall.

Several small bridges cross the Gairie Burn along its length in the Den, giving access to the park from adjoining properties that stand on the heights above The Den.

Several  footpaths give access to the Den from the town into the park from various directions. The principal of these is the access to Den Cottage from the Glengate. The main gate is located in Tannage Brae where there is a public car park opposite.