The History of the Arbroath Smokie

The origins of the ‘Arbroath Smokie’ begin in the small fishing village of Auchmithie, which lies three miles north of Arbroath. No one can say for certain where this method for preparing fish first came from, however the generally accepted story is that it came across with Scandinavian settlers, during the time of Viking activity along the coasts of Scotland. The Scandanavians have a great tradition in ‘smoked seafood’. The Arbroath Smokie is still smoked using a similar tradition.

Fishwives baiting the lines in Authmithie

The fishwives, smoking the fish on sticks, originally put them onto halved whisky barrels with fires underneath, and the smoke was trapped under layers of coarse sacking, provided by the jute mills in the local area.

A move to Arbroath

In the late 19th century, the fisher people began to move to Arbroath, being lured by the promise of better housing, a better harbour and overall better prospects promised by the Town Council of the time. They settled in the area of Arbroath known as the Fit o’ the Toon, and became one of the greatest contributors to Arbroath’s economy.

Today, you can smell the Arbroath Smokie being cooked when you are at the harbour.

Story of the Arbroath Smokie origin

There are several theories put forward as to the true origin of the Arbroath Smokie. One of the most popular relates to a cottage in Auchmithie in which haddocks were hanging up to be dried for preservation purposes. Unfortunately, a fire broke out and burned the house to the ground. Reputedly, it was then, whilst sifting through the ashes, wood, dust and associated debris that the ‘Smokies’ were discovered. This seems an unlikely story, however it is this romanticised version of the Smokie’s origin which is commonly heard around Arbroath’s Fit o’ the Toon.

This was adapted from the History of the Arbroath Smokie by Iain R Spink and R R Spink, www.arbroathsmokies.net.

Find out more about the Arbroath Smokie 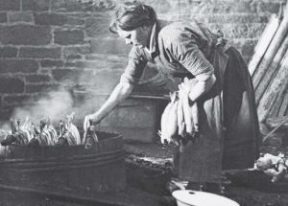 Follow the Arbroath Smokie Trail from Arbroath Signal Tower Museum to Auchmithie, the… 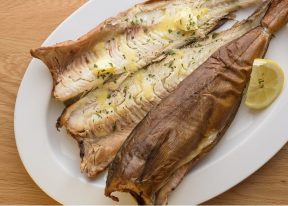 Where to get your Arbroath Smokies

Enjoy the taste of a smokie in many of the cafes and restaurants. 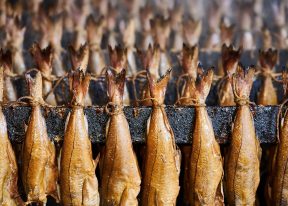 How an Arbroath Smokie is Made

Find out how an Arbroath Smokie is traditionally made.