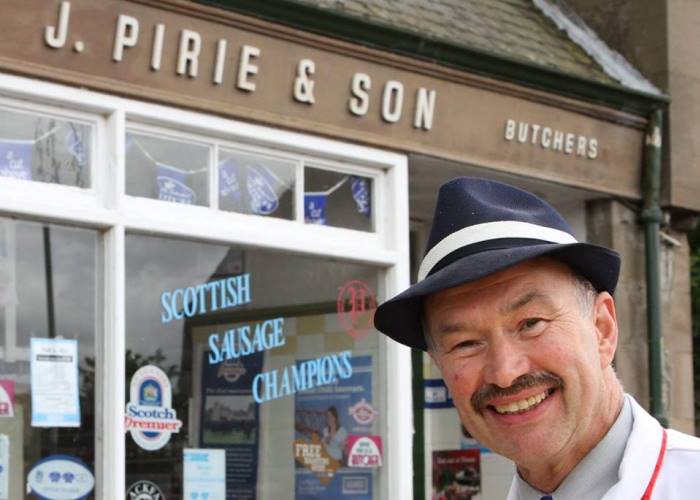 In 1960 Jim Pirie opened a butcher’s shop in the Angus village of Newtyle. Five years later, his son Alan joined him in the business. They have always maintained their reputation for handling quality produce and customers come from far and wide to purchase from a wonderful array of meat products enhanced by a hand-picked delicatessen range.

James Pirie & Son currently hold 179 awards and are extremely proud of all of them. Among the award winning products are Lamb Apple Mint & Rosemary Twirls, Tam O’Shanter Treats, Pork Tenderloin with Hot Banana Stuffing, and Family sized Steak Pies. In 2005 the business was absolutely thrilled to be crowned the 2005 Scottish Sausage Champions and 2005 Scottish Haggis Champions. The only butchers to have won both awards in the same year.

In January 2018, the business was named 2018 World Scotch Pie Champions. These three awards have brought great publicity to this village butcher and Alan Pirie, owner, has appeared on many television and radio programmes. Scotch Pie aficionados travel long distances to sample the World Championship Scotch Pie.

As well as the two shops in Newtyle, Pirie’s sausages, bacon and pies can be purchased at Longparke Farm Shop in Monifieth.