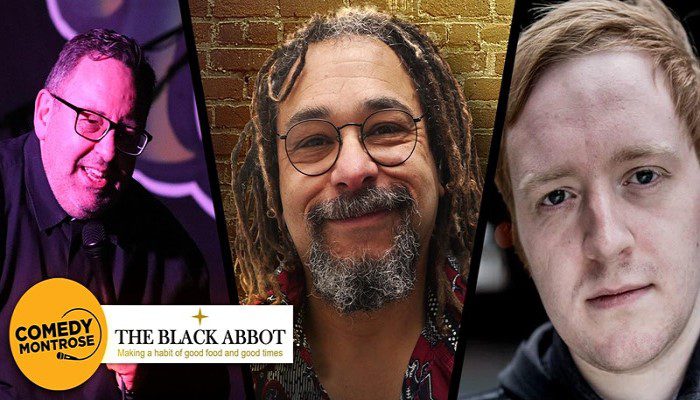 Comedy is coming to Montrose! On Friday June 3rd we’re bringing a stellar line-up of pro comedians to the Black Abbot in Montrose, including comedy heavyweights Bruce Fummey, Bill Dewar and Jamie Hutchinson.

Headlining will be respected comedian and Perth’s funniest son Bruce Fummey. Bruce has won Scottish Comedian of the Year, been nominated for Scottish Comedy Awards and appeared on TV and Radio. He is also well known for his hit YouTube channel Scotland History Tours, on which he writes and presents entertaining and informative videos that have amassed over 6.3 million views.

Your host for this evening is Bill Dewar, a highly regarded veteran comedian and master compere with the ability to whip up any crowd into fits of hysterical laughter.

Opening the show will be award-winning comedy rising star Jamie Hutchinson. Crowned 2017 XS Manchester Comedian of the Year, Jamie is one of the brightest sparks on the UK circuit. He has headlined the prestigious Big Value Late Show at the Edinburgh Fringe and was nominated for the Leicester Mercury award. His recent appearance on the hit comedy podcast Have A Word quickly went viral.

Tickets are from £10, presales are available here: https://fummey-dewar-montrose.eventbrite.co.uk/