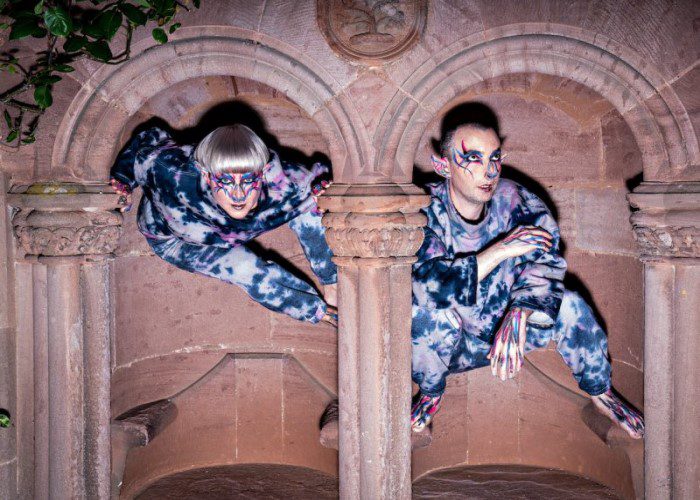 We invite you to come to Hospitalfield this September to tune into the more-than-human rhythms and frequencies of bats and dance together at dusk amongst the sounds and movements of Hanna Tuulikki’s Echo in the Dark.

A love letter to dance music, this newly commissioned art work is a series of ‘silent’ bat raves taking place at Hospitalfield on the 8th, 9th and 10th September 2022. This work has been inspired by and drawn from the bat sounds collected by communities in Arbroath and Angus for the Echo Location Library in 2021-22 with support from Tayside Bat Group.

Echo in the Dark is a major new collaborative music and performance project by artist, musician and vocalist Hanna Tuulikki that explores the interconnections of raving and bat echolocating as a model for ecological coexistence. To compose the music, Tuulikki has worked collaboratively with artist and music producer Tommy Perman.

In the Echo in the Dark ‘silent raves’ Tuulikki and Perman will DJ their new set of dance music tracks, inspired by and featuring bat echo-location sounds collected with communities in Arbroath, Angus, and across the UK through the Echo Location library.

Since 2020, Hospitalfield, Hanna Tuulikki and Dr David Martin of Tayside Bat Group have been working with communities in Arbroath and Angus to collect the sounds of bats local to the UK including Soprano Pipistrelles, Common Pipistrelles, Daubenton’s bats and Brown Long Eared bats for the Echo Location Library.

The beats and melodies of the music are made entirely from recordings of bat echolocation calls, including those gathered by Scottish communities in Angus, fused with the sounds of Tuulikki’s voice. Prior to the silent raves, two tracks from Echo in the Dark will be released on 28 July as a new 7″ lathe-cut vinyl EP and digital download with record label Blackford Hill.

The raves include choreography from movement director Will Dickie with a cast of dancers based in Tayside and Scotland and the music features a special guest appearance from renowned philosopher Timothy Morton who has written extensively about ecological awareness.