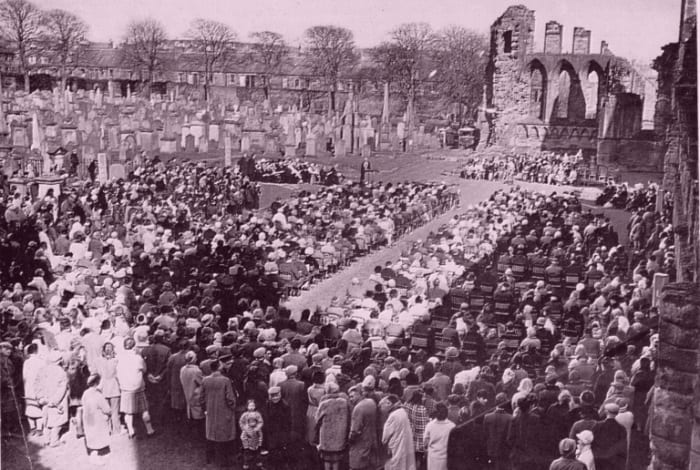 The Making of a Pageant 1947-2005 is a heritage exhibition celebrating the community effort behind the extraordinary Arbroath Abbey Pageant and Procession that took place 18 times between 1947 – 2005.

Holding the status of the most frequently staged Pageant in the UK to date, it was a trailblazer for technical innovation and was often years ahead of other such community spectacles. In Arbroath, the Pageant is renowned for how it drew people from all walks of life together to create an event for and by the people of the Town.

Visitors will be invited to explore recorded memories, photographs, videos, memorabilia and souvenirs drawn together from personal collections of the community in Arbroath, the ANGUSalive Archive & Museum Collections, the Arbroath Abbey Pageant Group and Historic Environment Scotland.

The exhibition will spotlight the making of the pageant and the community effort involved in creating the performances in the Abbey and throughout the Town. The creativity and innovation of the events will be celebrated; from the theatrical performances to the newly composed music, the amazing floats, hand-made displays in shops and the astonishing illuminated staging.

Oral histories of the Pageants featured in The Making of a Pageant will give insight into how so many people in the Town experienced the effects of the Pageants. Visitors will hear stories of childhood memories sneaking into the Abbey grounds, visions of the lights in a haar-filled sky, and backstage stories from some of the actors and instigators.

Arbroath Abbey Pageant brought together communities of people from across the town to consider Arbroath’s important history in contemporary life. The Pageant features a performance and procession inspired by the signing of the Declaration of Arbroath in 1320 and the historic events leading up to it. Audiences are presented with historical tableaux and re-imaginings of significant figures, events and narratives from Scottish history. Each pageant not only portrays the momentous occasion but reflects the civic concerns and interests of the day.

People travel from across Scotland, the rest of the UK and overseas to experience this spectacular illuminated event. The pageants are driven by the view that this historic occurrence in the small community of Arbroath is of national and international importance: Worthy of showcasing, exploring and celebrating.

A programme of talks, workshops and events will run during the exhibition opening.