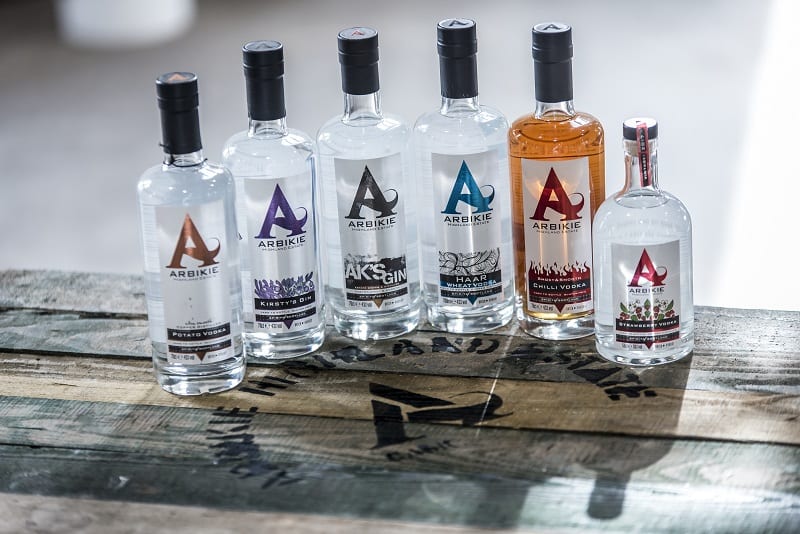 The Stirling family has been farming at Arbikie on the east coast of Angus since the 1920s, when Bill Stirling moved to the area. Today the 2,000-acre estate is owned and operated by three brothers – John, Iain and David, who first conceived the idea of building a distillery on the property over a few drinks on a night out in New York. Their concept was to produce the finest malt whisky in Scotland using a farm-to-bottle process – they also own the fields and water source.

This is not the first time distilling has occurred at Arbikie. The family believe there to have been a distillery operational in the area as far back as 1720, although the earliest record of a site is a map from 1794.

In 2013 the Stirlings began the 18-month build of their distillery in an existing cattle shed, utilising the skills of the farm’s mechanics and blacksmiths to assemble the stills created by CARL in Germany.

The first spirit to run off the still was a potato vodka using Maris Pipers and King Edwards grown on the farm, which was followed by Kirsty’s Gin in August 2015. By the following month, master distiller Kirsty Black was producing single malt spirit, which will be laid down for a minimum of 14 years before being bottled as whisky. Further innovative products have followed, all using ingredients grown on the farm or in the local area.

Tattie Bogle
Scotland’s first potato vodka. As an arable farm we have been tattie suppliers for Tesco for many years. Supermarkets have a certain standard for the shape and look of potatoes for them to be accepted. This accounts for many other vegetables and fruits. Those that don’t meet these standards are classed as ‘wonky veg’ and will not be accepted by supermarkets. ‘Wonky veg’ was counting as 25% of our harvested potatoes, so the Stirling brothers decided to innovate this problem and turn our wonky veg into alcohol. Tattie Bogle was our first product and is a mix of Maris Piper, King Edward and Cultra potatoes. Tattie Bogle vodka has a very creamy and earthy taste. Smooth on the pallet from the potatoes. Our Tattie Bogle is a gluten free product and suitable for veggies/ vegans.

Haar Vodka
On the East coast of Scotland we are prone to the rolling mist coming in off the sea this mist is called haar. You quite literally can’t see anything in front of you when the haar comes in. The distillery is perched on the East coast of Scotland between Arbroath and Montrose- we regularly suffer from this rolling mist and that is how we concurred with the name Haar Vodka. Our Haar vodka is made from zulu wheat which is naturally sweet (zulu wheat is found in numerous children’s cereals).  The wheat gives our Haar vodka naturally sweet taste, with caramel and toffee notes. Haar vodka is also suitable for veggies/vegans.

Kirsty’s Gin
Kirsty’s Gin is named after our Master Distiller, Kirsty Black who wanted to create a traditional Scottish gin thus, the botanicals are sea kelp, carline thistle and blaeberries (like a Scottish blueberry). All of the botanicals are grown on the farm or dived for (sea kelp) in Lunan Bay. The base spirit for Kirsty’s gin is our Tattie Bogle vodka, which contributes to the smoothness of Kirsty’s gin, making it very creamy and starchy (and gluten free). Kirsty’s gin tastes how you would expect a typical London dry gin to taste and that’s why it goes so well when paired with light tonic (light in reference to fizz rather than calories).  Suitable for veggies/ vegans.

AK’s Gin
AK’s Gin is named after Alexander Kirkwood Stirling who is the father of the three brothers who own Arbikie Distillery. AK’s Gin is completely different taste to Kirsty’s with more sweet and spicy notes. The base spirit for AK’s is our Haar Vodka- a zulu wheat vodka- which naturally contributes to the sweet taste of AK’s gin whilst AK’s is also combined with honey (we do have around 70 beehives on sight for our honey source). The botanicals include cardamom, black pepper and juniper, which contributes to the spiciness of AK’s. AK’s Gin is delicious paired with Ginger Ale or again a premium tonic and some orange zest. Suitable for veggies, unfortunately not suitable for vegans as honey is an animal bi-product.

Chilli Vodka
We use our Tattie Bogle to make our Chilli Vodka.  The chillis we use are imported locally and are chipotle-smoked jalapenos this creates a very smoky spicy taste rather than a hot spicy taste. We simply infuse our Tattie Bogle vodka with a large teabag of smoked-chipotle jalapenos this is left for two months for the flavours to develop and gives a naturally orange-red colour to our Chilli vodka. Our Chilli vodka is a must in a Bloody Mary!! Gluten free and suitable for veggies/vegans.

Highland Rye Scotch Whisky
Scotland’s first rye whisky in over 100 years. Highland Rye is a blend of 52% arantes rye, 33% viscount wheat and 15% odyssey malted barley. Our 3 year-old Highland Rye was released in December 2018 and priced at £250