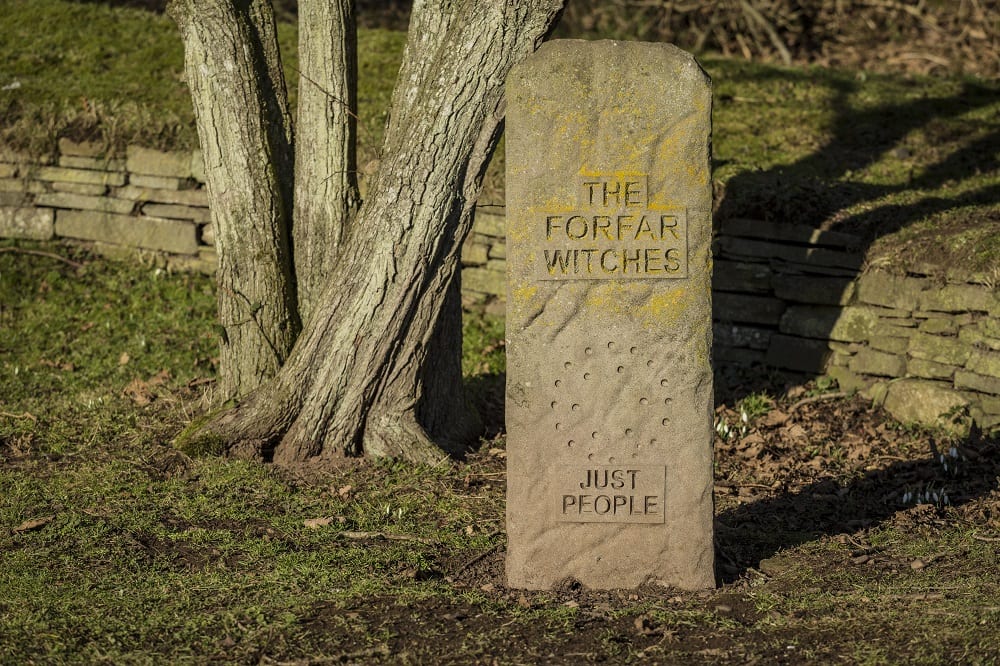 Angus is an excellent tourist destination not only because of the great scenery and historic buildings to visit but also the many fascinating – and sometimes spine-chilling – tales.

Lunan Bay is a beautiful stretch of beach between Montrose and Arbroath – very popular with tourists and locals alike. Towering above the bay are the impressive ruins of Red Castle – built by William the Lion who founded Arbroath Abbey and later granted to Sir Walter de Berkeley in 1194.

Sir Walter employed two devoted servants – a ten foot giant called Daniel Cajanus and a three foot tall Swedish dwarf called Linicus Calvus. The pair were inseparable friends and once Linicus surprised his master and all his guests at a feast in the castle by capering out of a giant pie that the mighty Daniel had brought to the table. Sadly Daniel died defending the castle during a Viking raid and little Linicus died soon after of a broken heart. 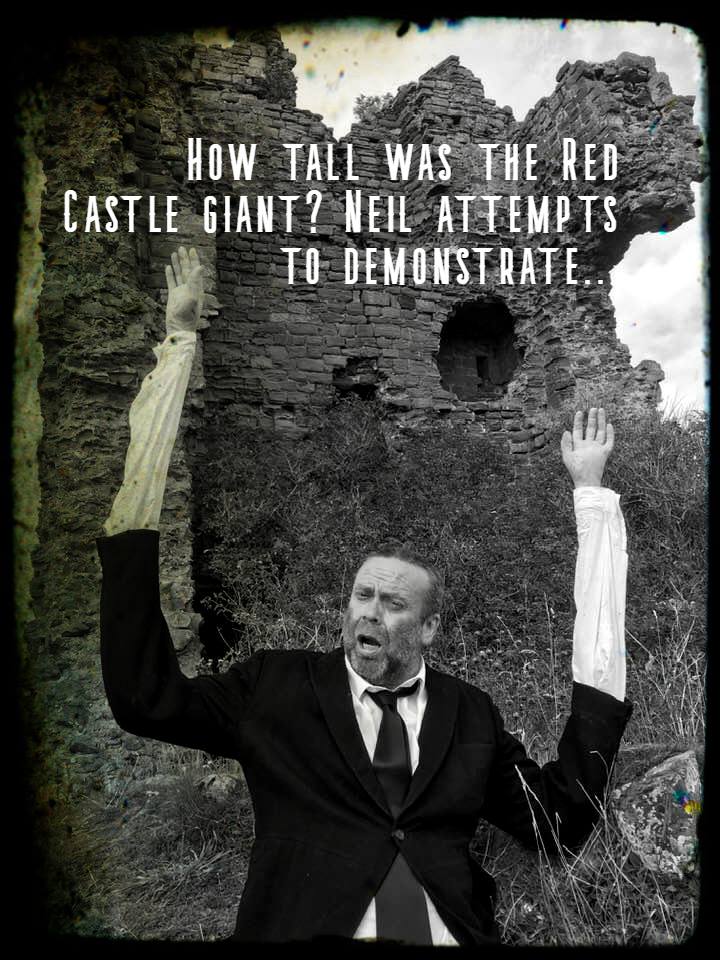 Another popular castle – Glamis Castle – is reputed to be the most haunted castle in Britain. Among the many spirits haunting the vaulted corridors and panelled rooms is the ghost of Earl Beardie – AKA Alexander Lindsay 4th Earl of Crawford.

Beardie was a violent and wicked man. He was the leader of an attack on Arbroath Abbey in 1445 which saw the brutal slaughter of many on both sides. He also had a servant boy pursued by hounds and torn to pieces in the grounds for the amusement of his guests (the little boy thus also becoming an unwilling ghost).

After his guests left a card game one Saturday evening out of respect for the approaching Sabbath, Beardie’s rages and curses that he would continue to play until doomsday if need be resulted in the sudden appearance of Satan himself and it is with this horned infernal oppponent that the shadow of the earl continues to play cards in one of the castle rooms.

Heading up the Angus glens are the Caterthun Forts north of Brechin. The White and Brown Caterthuns are wonderful examples of an ancient drystane and turf forts respectively and the views are breathtaking.

There is a tradition that the walls were built with the assistance of a witch who flew materials up the hill gathered in her apron. Unfortunately her apron strings tore one day and a particularly large stone plummeted to the ground just outside the walls. The boulder can still be viewed just to the north west of the fort and is a fine example of a bronze age cup marked rock. 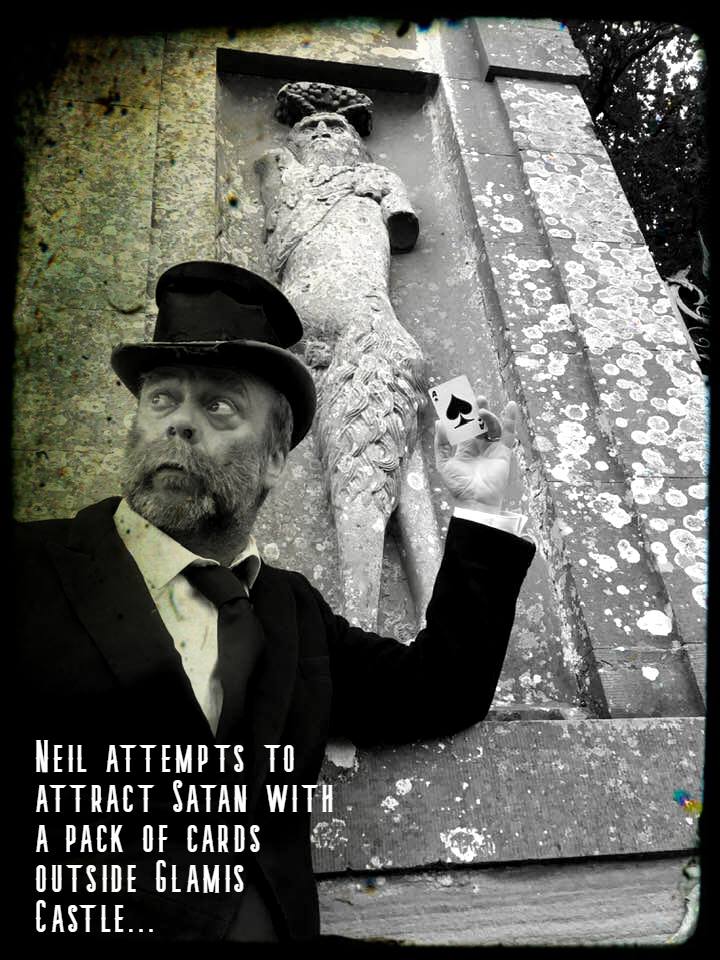 A sadder tale of witches is the true account of the Forfar witch trials in the 1660s. Over a couple of years, over 40 people – men, women and children – were caught up in the witch hunt hysteria that enveloped many Scottish towns in the 17th century. Considering how small the population of Forfar would have been at the time the impact of the accusations and imprisonments on the material and social economy can only be imagined. At least 22 people were publicly executed. They were strangled to the point of near death and then burned in barrels of tar. Their alleged crimes included destroying ships and crops by magic; ‘consorting’ with Satan and cannibalism. Other towns in Angus were also affected by the persecutions – a huge pit of charred human bones was discovered at Witchden Road in Brechin when the now demolished gasworks were being built.

A modest but fitting memorial to the Forfar witches can be found to the north of Forfar Loch on a visit to the Country Park where you can also enjoy sailing, bird watching – and the chance to view otters in the evening.

Glenesk is a marvellous destination for the keen walker and mountain biker and home to the marvellous Glenesk Folk Museum. Furthermore a pleasant day can be easily passed searching for the elusive Balnamoon’s Cave.

Balnamoon was James Carnegy, the 6th Earl of Balnamoon – a Jacobite who returned from Culloden with a price upon his head. Wary of returning to his ancestral home Balnamoon, Carnegy relied on his devoted clanspeople to shelter, feed and guard him in a cave at Glen Mark in the far reaches of the glen. He lived here for over a year before he was captured and sent to London for trial. Fortunately for Carnegy, he was pardoned in 1748 – largely due to confusion over his identity.

Finally for now, everybody knows about Kelpies – the magnificent steel sculptures that grace the Helix near Falkirk. Fewer people are aware that these malevolent shape changing water spirits were aslo once rife in our own county.

St Vigeans is a hamlet to the north of Arbroath where a museum houses many examples of Pictish stones with depictions of bears and ogham script. The church is said to have been built upon the home of a kelpie who threatened to have his revenge by sinking the building and all its congregation into his infernal lair. The townsfolk were so worried by this possibility that sacrament was not celebrated there for many years and in 1794 a great crowd gathered to behold the building crumble and slide to its watery fate below. They were very sadly disappointed.

Another kelpie built the old bridge over the South Esk at Shielhill outside Kirriemuir. So proud was this beast of his handiwork that he placed a self-portrait – a carving of a grotesque horse’s head – above the keystone as a reminder of his labours. You can view the head from below on the east side of the bridge and the waters here are excellent for swimming. 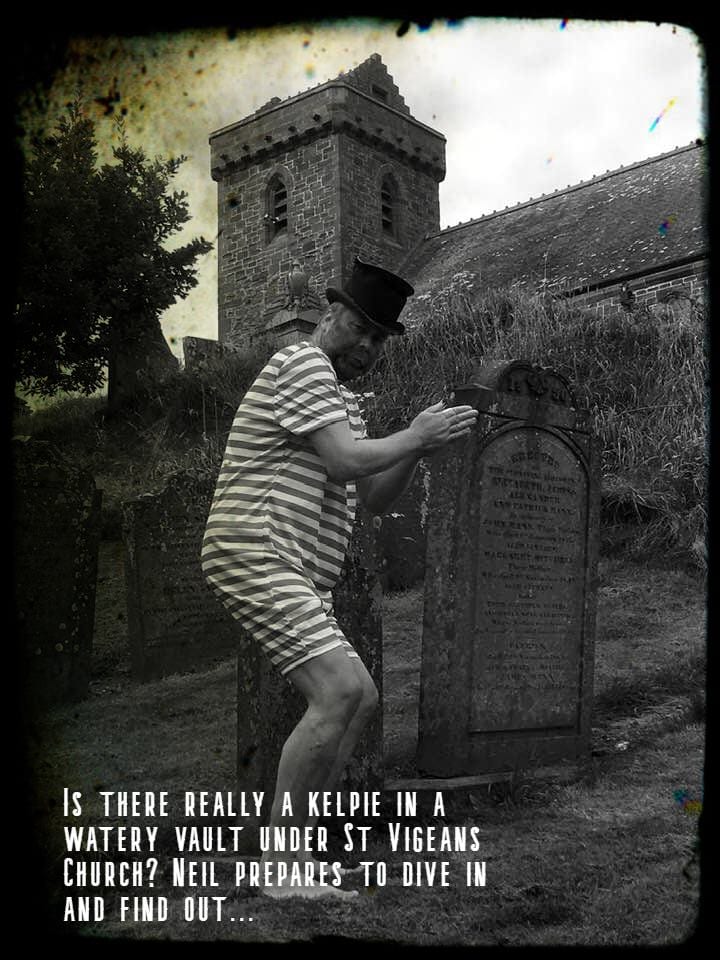 All in all, Angus can be thoroughly recommended for anybody curious about myths and legends, tall tales and true.