Our diverse one-day itinerary has been created to help your clients discover the best history and heritage attractions Angus has to offer among some of the most spectacular locations in Scotland.

Guests will take a journey on a heritage steam train, join a costumed tour of a Georgian House, see Pictish stones dating back to AD500 and enjoy a guided tour of an arts and culture centre.

A DAY OUT IN ARBROATH, BRECHIN AND MONTROSE

Let’s start at the beginning with a visit to the village of Aberlemno near Forfar, where visitors will find four stones with Pictish carvings, variously dating between about AD 500 and 800. They comprise a leaning, reused prehistoric standing stone, an unshaped boulder bearing traces of two symbols, a magnificent cross-slab and a sandstone cross-slab in the churchyard. The stones show a range of carvings, from characteristic Pictish symbols to overtly Christian iconography.

The Pictish Room in the adjacent Village Hall (not HS) is open one afternoon per month in summer. Opening dates are listed on their website.

Travel on to Brechin for a journey with the Caledonian Railway, a heritage steam railway which runs for 4 miles from a unique Victorian terminus station at Brechin to Bridge of Dun, a line which had first been opened in 1848.

During that time the small town of Brechin had begun to grow and become known for its produce, namely textiles and whisky. To allow the town to continue growing, a method of moving large quantities of materials in and out of the town was required. In 1952 the line closed to passengers until 1993 when the Brechin Railway Conservation Society, who had taken over the line and it’s two stations was given permission to run a passenger service again.

The Caledonian Railway offers a regular schedule but also invites excusive group bookings of carriages. Journeys can be enhanced with a food offering from drinks reception, gin or whisky tastings to afternoon teas and lunches.

Near Bridge of Dun in Montrose, the Park Hotel may be an option for lunch. The 52-bedroom 3-star hotel has a restaurant that offers a relaxed atmosphere with a choice of the best of our local produce – from Aberdeen Angus beef to Arbroath Smokies, locally grown fruits and vegetables.

In Montrose you also find House of Dun, a William Adam Georgian house that places baroque extravagance in a spectacular natural setting. With stunning vistas overlooking Montrose Basin and set amid glorious gardens and woodland, House of Dun is every inch the perfect 18th-century laird’s home. Built in 1743 to replace the medieval tower house that had been home to the Erskine family since 1375, the house is filled with treasures that tell the stories of the people who lived here.

Heading south, near Arbroath, your clients can dip much further back in time again. Here they find Hospitalfield House and Garden, a hospital that was founded on the site in the 13th century by monks from nearby Arbroath Abbey as a leprosy and plague sanatorium. The property was purchased by the Reverend James Fraser around 1664 and was subsequently owned by successive generations of the Fraser family. Sir Walter Scott visited the house in 1813, and he used it as the model for “Monkbarns” in his novel The Antiquary (1816). Today it is an arts centre and historic house, believed to be “Scotland’s first school of fine art” and the first art college in Britain.

Private tours of the house can be requested, which give an insight into the history with a focus on the 19th century and the legacy left by the artist Patrick Allan Fraser and his wife Elizabeth. The distinctive double Walled Garden at Hospitalfield has been redesigned by garden designer Nigel Dunnett and opened to visitors for the first time on 27 May 2021. The scheme was developed to reveal the unique horticultural history of the site at Hospitalfield, which has been tended as a garden for over 800 years. The Fernery at Hospitalfield was designed in 1872 by Patrick Allan-Fraser as a grotto-like building intended to house a collection of New Zealand tree ferns that were presented to him by Captain Peter Logan. It is the only surviving Fernery on the east coast of Scotland, and one of only four buildings of this type in Scotland.

The Garden Café offers food and refreshment to visitors and menus can be tailored according to requirements.

Clients return back to their accommodation after the day exploring beyond the usual tourist routes.

Angus offers a broad choice of places to stay during your clients’ visit, from traditional cottages and coach houses to comfortable hotels in convenient locations. 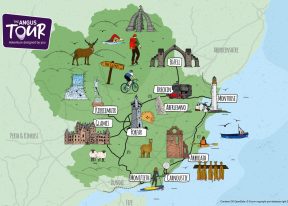 The Angus Tour - Adventure designed by you

Design your own adventure on The Angus Tour 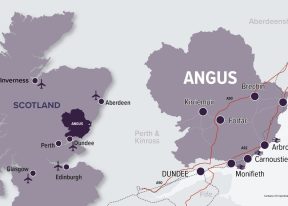 Travelling to Angus Made Easy

It's easy to get to Angus by car, coach, train or air